Who is this Vokes Person: the interviews

By way of giving some more background on the "living legend" that is the Vokester (great-now I'm talking about myself like I'm not here...) here's an old interview from 2003.

It was done for a proposed website about me that this nice fella wanted to do-but as I've heard little from him since then,he's obviously come to his senses...


b3: First off, lets talk about where you came from. I've heard rumors of you as a small babe, a spaceship from a dying planet, and a small farm in Kansas.... any truth to those rumors?

Vokes: None whatsoever...It was a dimensional rift which threw my still pulsing gelatinous form into your earth's atmosphere-smack dab into the middle of a trailer park in ft. Lauderdale, Florida! -{laughs}- Well...the Florida part is true. 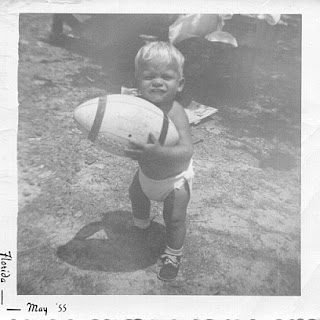 b3: How about the ones about you being able to leap tall soda cans in a single bound or draw a speeding locomotive?

Vokes: It would seem that many a legend has sprung up about my dark and mysterious origins-well-to take a page from John Ford: "...print the legend."

b3: What was the first comic that you can remember reading?

Vokes: I recall the place and the book-at least the name of the book anyway-It was in a barber shop (Tony's)-and the 1st comic i remember reading was (drum roll) "Superman" !

b3: What comics did you read as a kid?

Vokes: The aforementioned "Supes"- all the various DC comics-my favorite title being "Batman"-but,truth to tell, i was more interested in horror movies -My favorite mag was "Famous Monsters of Filmland"-it was my Bible (no offense-i didn't actually worship editor Forry Ackerman)

b3: When did you decide that you wanted to draw comics as a living?

Vokes: I think i always felt that drawing comics would be cool-my dad encouraged me to draw-not comics though-he used to destroy my comics on a regular basis-thought that they'd warp my mind-hmm...he may have had a point-lol-But as far as wanting to do them for a living-i never seriously entertained the notion-i was too busy trying to get my screwed up life in shape

b3: It's a hard field to get into, and you certainly have the talent, but how did you "break in"?

Vokes: Well,it's a long and twisted story-so I'll do my best to make it longer and more twisted...

I had, for many years,worked in a furniture warehouse as a supervisor-and was very near going postal-when the guiding hand of fate intervened and slapped me silly! They laid me off with the promise of calling me back in the near future-that was 18 years ago...they still haven't called-but i have faith that someday...lol-Anywho,I languished in the crowded halls of the unemployment office for what seemed years (it was about a year and a half actually-that free money thing was very addictive) -Then,my wife,Siri,and I had a serious talk about what i was going to do with myself-i had no frikkin' clue! 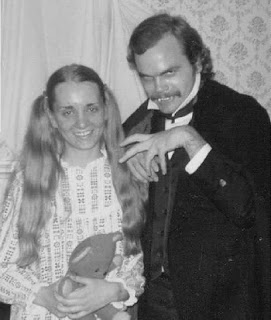 She suggested trying to break into comics-i told her she was insane!-lol-But,history has proved her quite sane-i bought several anatomy books-including Burne Hogarth's series -and hunkered down to about a year of serious study-i never really practiced before then-lol-whatever talents i had as an artist were either supernaturally endowed upon me...or i was born with it.
I then began to send in various samples to the different companies(this was around '82-'83)-including Pacific Comics-the home of 'Grimjack" and 'Starslayer' -They were the only company to send back a copy of my samples with copious notes on them-and a rejection-lol-i'll always be grateful to the famous Joe Staton for helping me figure stuff out back then (he's become a pal since ) -it was at this time that i met one of my best friends: Rich Rankin-he was running a Heroe's World-a comic shop in a local mall-and was an amateur artist like me-we struck up a friendship-he was also sending in samples-we decided to try something different-work together as penciller and inker! However,we didn't know which of us would be which. So,we started with me telling a story and him inking it-it worked well enough that we never tried it the other way around-We sent stuff in-got more rejections-then did a short story ("the Gauntlet"-an 8 page tale with our own characters and no ending) and sent that out-Nothing...until Comico comics, future home of "Grendel" and "Mage", liked our story and wanted to publish it in their new talent showcase:"Comico Primer and they wanted to pay us!
So,we said sure!

We went to Norristown,Pa. to get to know the guys better (they were all freshly out of art college-we were both older than all of them) received a check for our story-and became friends with these guys!-That helped us get in on the bottom floor of several (thankfully unpublished) projects-but this was wonderful on the job training -So,when our 1st "big break" came along-"Robotech Masters"-we were in the right place at the right time...Whew-I told you it was a long story. 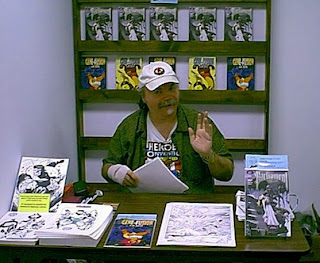 b3: Looking back, with your long career drawing these funny books, what are you most proud of?

Vokes:I'm most proud of several things-probably the 1st important thing i did as a pro was also a self created project: "Eagle"-We did that right after "Robotech"-actually while we were still drawing it,much to the chagrin of then editor Diana Schutz (who,along with the infamous -and verrrry dangerous-Bob Schreck,was very helpful to me back then)

"Eagle" was a turning point for me-as a book and as way of exploring things in the form without an editor watching over me,telling me how to do things the "correct" way-(this is not a put down of editors,by the way-lol-I've worked with several very good ones-starting with miss Schutz)-But it freed me up to discover "my style" of storytelling-after that,there were several others-"Congorilla";"Hammer of God";(both inked by that inking god:Jay Geldhof)"Life,the Universe,and Everything";"Tarzan the Warrior";"Ninjak" and now "Superman Adventures"-

b3: Who were the influences on your art?

Vokes: Artistically I'd have to say the 1st people to make an impression on me as artists (when i grew to be old enough to think beyond "wow-this is cool!") were Kirby,Steve Ditko,Gil Kane,Mike Sekowsky(an underrated artist),Kubert,Nick Cardy, and later Neal Adams,Toth, Wrightson and a whole slew more-
Storytelling wise,i learned from films-movies were always my favorite things-and whatever talents i may have in that area came from films (and those old pros like Kirby and Ditko) 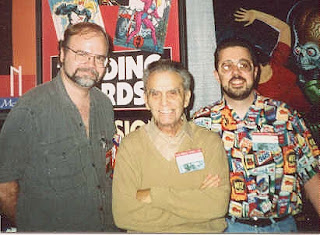 b3: Is there anyone in the field that you haven't worked with, that you would really like to?

Vokes:Egad!This bio is long enough-lol-I've had the honor to work with some wonderful writers already(Busiek,Engleheart,Baron,Wheatley,Stern,among others)-but there are a few left I'd love to work with(Gaiman,Moore,Dini, and a whole lot more!)-And I've also enjoyed working with several inkers,letterers,and colorists who made doing my job a heck of a lot of fun!It's a long list! 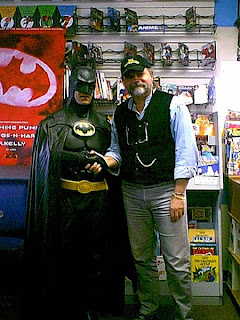 b3: Do you read any books currently?

Vokes:Basically,no-I've found that my interests went elsewhere-mostly back to movies-lol-(i don't mean to imply that there's nothing to like-there are too many good books out there-i just don't have the same interest anymore)

b3: Are there any "new guys" that you think are doing some good stuff? 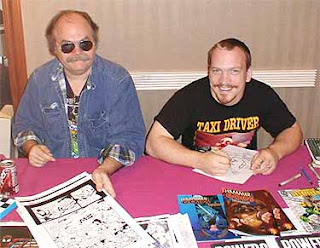 b3: You've done some creator owned stuff, care to enlighten any readers who may not know about them?

Vokes: I've already spoken about "Eagle",my 1st baby-there was "Jonny Demon",with Kurt Busiek; we have to do more of that !There are others; some x rated-naughty Nels-and a bunch of unpublished... 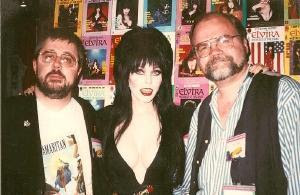 b3: Any new creator owned projects coming out?
(Note: this was of course before PARLIAMENT OF JUSTICE,THE BLACK FOREST and THE WICKED WEST books)

Vokes:Lots being worked on-lol-but coming out? not for awhile yet-i can safely say that Kurt and i are brewing up a new project-for next year-I can't speak about it yet-save to say,it will be lighthearted,probably "cartoony" and may show up in a,for us,unusual place (he says coyly)-

b3: I hear that you have an unnatural fascination with *really* old guys with swords, who like to slice off each others heads.... What's up with that?

Vokes:You must be talking of "Highlander"-lol
Yes,i love the concept-when we did "Eagle",it was called "Richard Eagle:Psychic Detective",until i saw the 1st HIGHLANDER film-after that,my already keen interest in martial arts,swashbucklers,and swordplay mutated into an obsession-i then proceeded to alter "Eagle" into a story of an immortal loner with a sword-But Highlander is a cool idea (in spite of the 2nd and 3rd film)-and i proudly have in my growing sword collection,several Highlander blades. 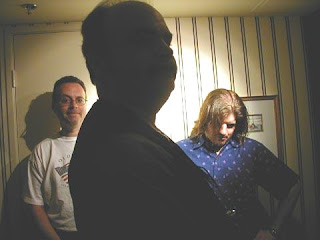 b3: What are some of your favorite movies?

Vokes: heheheh...This will be a very long bio-lol-"Highlander"; "Horror of Dracula"; "The Magnificent 7"; "The Vikings" ; Coppola's "Dracula"(it's not Bram Stoker's Dracula-more like Dan Curtis' Dracula,with a bigger budget); "The Matrix";"The Bride with the White Hair"; "Burning Paradise"; "West Side Story"; "The Searchers"; "Rio Bravo" and hundreds more westerns,horror films,musicals,comedies, etc.,etc.,etc...

Vokes: As i said earlier,i don't read much in the way of funny books anymore-i have enjoyed "Marvels"; "Astro City";"Leave it to Chance"; "Watchmen"; "Peace on Earth";"Kingdom Come";"Powers";"The League of Extraordinary Gentlemen"(?) and many more.

Real books: "Red Dragon/Silence of the Lambs/Hannibal" by Thomas Harris;"The Exorcist/Legion/The 9th Configuration" by William Peter Blattey;"Magic/The Princess Bride" by William Goldman, and a lot of film biographies and behind the scenes stories-most recently "Burt Lancaster"; "With Nails" by Richard E. Grant (hilarious);" Adventures in the Screen Trade/Which Lie Did I Tell ?" also by Goldman-many more. 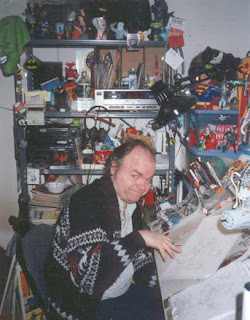 b3: Any words of wisdom for someone trying to break into comics?

Vokes: Don't try!-We're all booked up!-lol
But seriously folks-learn to draw-another "duh", i know-but take a close look at some of the artists working recently-yeesh-they skipped the learning to draw part,it seems-look very closely at life-study people ,places and things;learn how a coat wrinkles when you bend your arm or leg;study anatomy(another 'duh",but again look at those aforementioned "artists");learn outside of comic books(you can be sure the best ones did);and most of all:BE YOURSELF!
with all this other knowledge inside you,it would be a severe waste to spend your life drawing just like somebody else!(yet another "duh")

b3: I also hear you managed to snag yourself a wife. I thought that comic geeks couldn't get chicks :)
How did you score that one?

Vokes:I was lucky. I snagged Siri after I was getting away from reading comics and before I was a pro artist. So there-the true secret to my two major accomplishments in life (my marriage and my career) : TIMING! 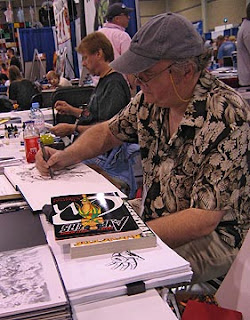 Is that a picture of Neil? Holding a football?!

Yup- my daddy tried to get me hooked VERY early-lol-but seeing as how i grew up with NO predilection towards sports-i can only assume that I thought it was something to eat...;o)