While digging thru my archives (much less difficult nowadays thanks to the computer) trying to compile material for this blog,i stumbled on this forward i was asked to write for a trade digest that came out about 5 years ago.

Robotech was not my favorite book by any means-and certainly not my BEST work by ANY stretch of the imagination-but it WAS important to me for many reasons. 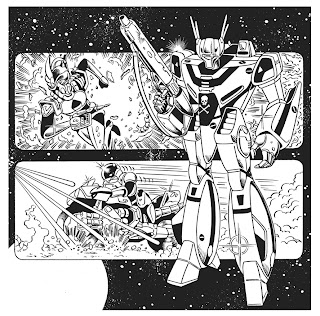 It was at the beginnings of my career- a great time because of the excitement of being a professional comic book artist-a lifelong dream- and i not only got to work on a regular monthly book for the 1st time (in itself a GREAT learning process-not just the obvious plus of refining my craft,but the discipline needed to meet those 3-4 week deadlines,month after month) but i got to work with some wonderful people-many of whom became good friends (always a plus ;o) 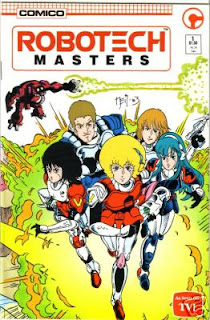 ...until recently that name has only been mentioned around me at comic book conventions, and then only rarely, in the last decade or so-the advent of these reprints has brought back many memories, specifically about the couple of years I drew: 19 issues of ROBOTECH MASTERS, two issues of ROBOTECH MACROSS and the ROBOTECH GRAPHIC NOVEL. Those years were significant to me for various reasons, but primarily because that’s when I started drawing comic books professionally.

I had been fortunate in the midst of my samples sending days (early 80s) to have been taken under the admittedly young wings of a new company called COMICO COMICS. (They were a small bunch of Philly art school grads who wanted to make comic books.) They printed a short story I had done (with old friend Rich Rankin on inks) in their COMICO PRIMER book, a new talent showcase. Thus, I earned my 1st official comic artist check in November of ’83. This led to my penciling one of their new color line of books, AZ. Now before all you rabid fans rush out trying to find that rare early work of yours truly, I have to warn you that it doesn’t exist. I did draw three full 30-page issues and Rich inked two of them, I believe. But publisher (and creator of AZ) Phil Lasorda came to his senses and decided against putting his tall, pink, otherworldly private detective on the store racks, (I thank the comic gods for that every single day.) and concentrate on other titles.

This apparent setback in my blossoming career had two major advantages: 1) it gave me 90 pages of storytelling practice (and they paid me!) that I desperately needed and 2) it paved the way for my being offered one of three new comics COMICO was about to publish…I’ll bet you were wondering when I was going to get around to talking about ROBOTECH, weren’t you?

Rich and I were offered any one of the three titles we wanted to draw-ROBOTECH MACROSS, ROBOTECH MASTERS or ROBOTECH THE NEXT GENERATION. Looking at the model sheets and various mounds of material showcasing the three stories, I chose MASTERS (I liked the designs of the armor-thus are world shaking moments made.). It was all ours…if we also drew the next issue of MACROSS within the next two weeks-pencils and inks! Well, just like those legendary tales of young actors who when asked if they could ride a horse for the film say ”Sure-I was BORN on the saddle!” when of course they’ve never been closer to a horse than watching the Duke on TV in STAGECOACH,we bravely (or stupidly depending on your point of view) took on the task and succeeded, with time to spare.

Then we had to do issue 3, also, in about the same time frame. We were typecasting ourselves as quick and (mostly) competent artists and it was killing us. But at the end of this emergency run, we knew we had a book of our very own…and that’s right, we were already late due to having spent a month on MACROSS!

The benefits of this project improved with the addition of writer Mike Baron to the mix. With NEXUS, Baron had proven himself a wonderful writer and I was honored to be working alongside him. You would think with all this going for us, it was all sunshine and lollipops, yes? You see, there was one huge hill I had to get over the moment I started in on that emergency MACROSS job, I had never drawn the anime style before…EVER!

I was familiar with the cartoons like GIGANTOR, ASTRO BOY, 8TH MAN and the others, but this new style of Japanese cartoon was fairly alien to me. I took a crash course on everything I could get my hands on via Harmony Gold’s reference material: the original MACROSS toons and all the books on anime I could find. I hadn’t even developed my own style yet and I was being asked to draw in a totally foreign one. Thinking back on this point, now, I feel that my fresh take on the style gave my book a distinctive look in comparison to the other two.

There are many, many stories I could tell you about working on these comics back then. I wish I had the space to tell you about: all the friends I made during those years (one being Bob Schreck, who is probably lurking around this very book somewhere-love and kisses, Bob.) and the wonderful fans I met during the many conventions (and all those Veritechs I had to draw for them.).

I’d love to talk about my favorite bit of ROBOTECH work (the ROBOTECH GRAPHIC NOVEL-where I got to work with the great Ken Stacey) but then this is not a book about my career (no matter how hard I’ve tried to make it one). No, this book compiles the combined work of a small bunch of dedicated, young American artists and writers who attempted to share their enthusiasm and respect for the Japanese cartoons we know as ROBOTECH. 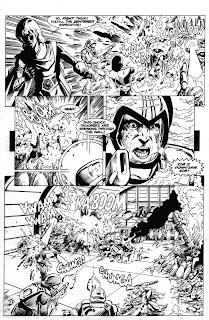 As another potential regular feature of this blog,I thought I'd post several of my favorite quotes about myself and my work...

...I know-I know- posting quotes about oneself borders on pure egotism...well,actually it rests somewhere past the metal detector on the border of pure egotism-but these comments by friends,fans and critics are part of what gets me thru the dark side of being a creative personality-they reaffirm-they encourage-they provide that little extra pat on the back for doing a good job that we ALL need in life.

Besides,some are really fun to read (which is more a reflection on the writer than their subject ;o) - and some-like my lil bro Mikey's here-are just hilarious.

so without further ado...

He can draw like birds can fly, like the rain tap dances on your roof and like a sunset makes you sigh. In other words, its part of him. Drawing is a natural state for him.

More than that, he's my friend-a mentor in many ways and someone I care about deeply.

So, if you come at him with suntan lotion, scissors, anti-Viagra or a thesis on the implausibility of "Highlander", I will kill you.

Neil is a great guy, and may Brian Blessed sit on anyone who says otherwise." 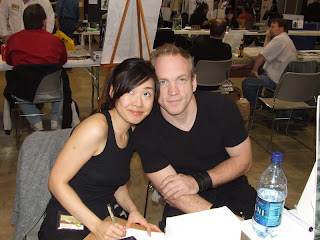