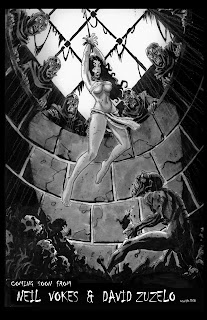 "The Tastiest Snack...About to Kick Some Zombie Ass!"


OK-in point of fact the above image (on a promotional teaser postcard you'll be seeing soon at my upcoming shows) isn't SPECIFICALLY from my new project with Mr. David Zuzelo-it's actually a commission i did for a fan at the Pittsburgh Comic Con this year (it's based on an old pulp novel's contents page illo) and i added the little blurb at the bottom for the cards.

However, it DOES represent a certain tone-atmosphere-style-that WILL be in our book-and i promise you that a variation of the scene itself will most certainly be used in some capacity within the stories we're working on-I just dig the vibe,man...;o) 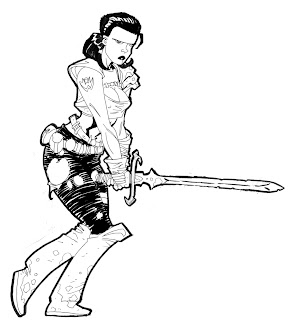 The young lady above is one of our main characters- I don't wish to get into any specifics yet-i wanna keep some mystery-but I WILL be showcasing various character designs,layouts,etc in here as we progress-such as this: 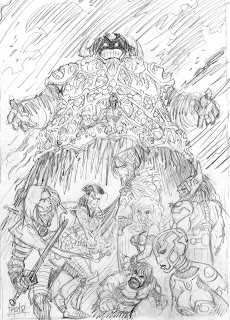 What's this book about?

It's kinda hard to describe in one of those Hollywood high concept ways that are so common nowadays-we wanted it to have a mix of elements we both enjoy in films and comics.

How about an adventure/fantasy/horror...and other stuff series that has bits and pieces of ROAD WARRIOR, YOR, HERCULES UNCHAINED, PLANET OF THE APES, THUNDARR THE BARBARIAN, THE NEW GODS (among other Jack Kirby influences) and-we hope-enough original stuff of our own as well.

Who's publishing this tome?

We don't know for sure yet-We're of the mind to self publish-which in this day and age is a little easier than it used to be-but having a company logo on the cover is not out of the realm of possibility,either-we'll see...;o)

When will this book be out?

We are still in the early stages of design,story and so on-We CAN tell you that we are having a lot of fun with this.

We want to put out an entertaining "adventure/fantasy/horror/and other stuff" series that knocks your socks off (who really needs socks on while reading a comic?) and if you can catch just a little of the passion we have for this from reading it,then we've succeeded.