Marc of the Vampires

One day,many years ago,i was sitting in a hotel restaurant in San Diego (i think it was San Diego) talking with old friends Mark Wheatley,Marc Hempel and a few others about stuff and a vague idea i had for awhile started to gel during our conversation.

i had this idea about a homeless vampire-sleeps in a beat up old refrigerator box instead of a coffin- and had no where to go with it when a play on words brought the title to me- there's an old Bela Lugosi film called MARK OF THE VAMPIRE and as Marc and Mark were sitting right there i thought I'd call it MARC OF THE VAMPIRES-because it's about a vampire named Marc-cute,eh? 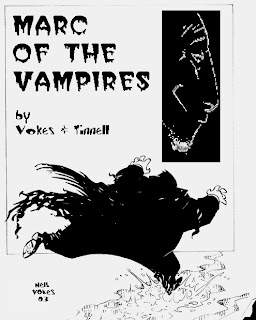 Well,i had little more than that for some time,but then Hempel's strip GREGORY was rocking my world and i thought I'd "borrow" a bit of his concept-Marc's character was this little boy who was in an insane asylum-usually in a straitjacket- crazy-yes-crazy entertaining and funny-seek it out-but anyway,i thought that maybe Marc had literally grown up in an asylum-a "home"-where he was taken care of virtually his whole life- other than his Doctor ( Orloff-what's that reference from,true believers?) all he has is his precious books- the fiction of literary giants through out history was his family.

Anyway...it took me years to figure out what Marc looked like and one day i hit on it while watching one of my favorite Japanese film series-ZATOICHI-his battered,unassuming shape and body language speaks volumes about him-it also disguises the beast within-Zatoichi is a master swordsman-a deadly killer-but only wants to be left in peace- Marc has some of those attributes,so i tried drawing him like the actor Katsu Shintaro-and Marc of the Vampires was born! 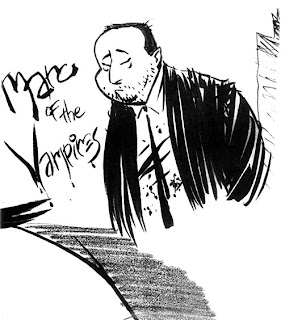 It was still a few years before i sat down and drew a story with Marc-he even almost became a one panel comic strip,done with black humor-a little Gahan Wilson of sorts-but that proved difficult-i wanted to tell more of his story.

Not being a writer i naturally drew silent tales of Marc's little adventures at first- then i got a chance to put a story with Marc into a book-the MORE FUND BOOK at the Baltimore Comic con-but it needed words-something to explain a little about this mysterious fanged nebbish.

Fortunately Bob Tinnell came up with some words to make things a little less confusing-just a little- Problem was i had a short story's length to tell a graphic novel's story-so i decided to play it like a short chapter of a bigger tale-hoping the fans would beg for more!

The begging never came and his story just ended in the middle of a scene-sigh... 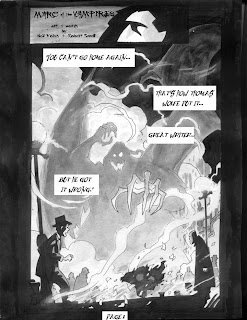 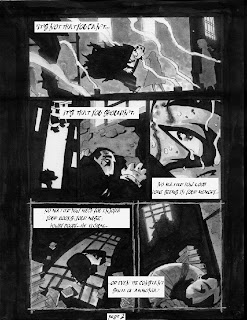 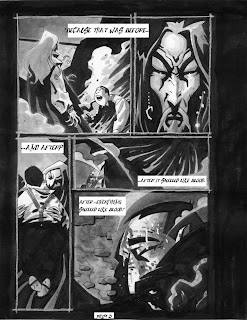 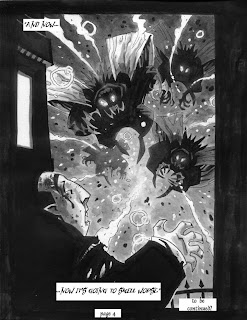 Yup-that's the whole story- well,not really,but it's all we had room for so that's where it "ends".

We WILL finish it someday-promise-but until then i recently got a second chance at a more self contained story... 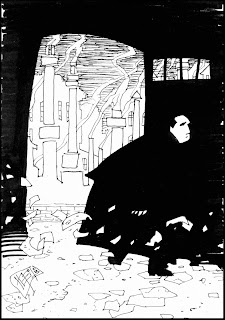