Who is this Vokes person: the interviews-part 2: Sequential Tart: 13 Questions

This is a very interesting site because it's primarily about-and by-women in comics.
Now why they wanted to interview ME-a man (or so I've been told all these years) -i can't say-you'd have to ask them.

But i thought it might be fun to share (it's from 1999 by the way) -please excuse any repetitious info-invariably certain details are gonna be repeated in each interview...

Neil Vokes has been working in comics since the early 1980's. He has collaborated with Kurt Busiek on several projects and has cultivated a diverse variety of styles from horror to humor. You'll probably find him at some convention wearing his Highlander cap, sketching away in Artist's Alley. After some digging, Sequential Tart staffer Katherine Keller recently caught up with this wonderfully warm hearted yet technophobic (he doesn't even have a fax machine) artist.

1. What’s the first comic you ever remember reading?

Well, I guess it would probably be a Superman comic. In a barber shop... some time in the late '50's. I was born in '54, so they used to have comics all over the barber shops in those days.

2. Well, that segues right into my next question. What superhero did you want to be when you were little and why?

Actually, I probably wanted to be Batman.

I think because even then I realized that he was more attainable. Because Superman, well, he came from another planet. That would have been a little difficult. At least with Batman I could have conceivably trained my body and my mind and someday put on a silly outfit and been Batman [laughs]. So there seemed to be more — a little less fantasy oriented.

3. What was your first professional work — what made you think "Yeah, I want to do this?"

I kind of got into this the wrong way. I had discussed it through the years with friends and family about I wanted to do this, but I don't think I had the actual ambition, the initiative to get into it. It had more to do with necessity at the time.

I'd lost my real job — so called real job — and my wife gave me the option. She said do you want to do this, or do you want to do something you really want to do? And I said, like what? She said comic books, you've always wanted to do them. She helped me get through the kind of "training period" — she paid the bills and such. And I managed to get work and haven't stopped working since.

So, it's not like I went out of my way over the years to attain that goal, so much as it kind of just happened and I seemed to fit right in.

4. So, what was your first professional work that you remember?

My first professional work was at Comico. They were just starting out in those days. All those guys had just gotten out of college, started up a company, and a friend of mine, Rich Rankin, sent some samples of ours to everybody, and these guys liked it and wanted to publish one of these stories we did. They hired us, and I pretty much haven't stopped since.

Oh, definitely by design. I think probably it's based more on the fact that I'm easily bored. I don't want to be stuck in one particular groove as far as my art goes. I just like doing different things, I don't just want to draw superheroes, or just draw horror comics, or just whatever. I want to draw a little bit of everything, so I kind of, through the years, adapted my style to fit whatever it was I was drawing. It kept my interest level up.

I think there's a downside to it though. Unfortunately, like everything, especially in entertainment, people have to pigeonhole you, and if they can't they tend to...not remember you. So, because I keep adapting from one book to another, I think I'm probably not noticed as much in that sense.

But in the other sense, people like yourself, fortunately see my work and they appreciate it probably more than the average fan would — I kind of like that more. But I probably don't get as much work as the guy who would draw it the same way all the time.

6. You've done several collaborations with Kurt Busiek. How did this happen?

Well again, this happened because I was just getting another assignment, and it was for... Vampirella Comics...when Harris comics had just started them. And Kurt was writing a Dracula story with Vampirella, Richard Howell was the editor over there at the time, and my agent over at Star Reach had sent my work to them, they liked it and Richard Howell asked me to do the story, so I said fine and I started some phone conversations with Kurt, got to know him a little bit and found out we had a lot of the same interests, both in comics and in movies.

And...I actually drew the first 15 pages of the book before I was fired. The powers that be apparently didn't think my style was appropriate — thought it was too cartoony. Kurt and Richard both loved what I was doing. And this apparently according to Richard was just one of many incidents that he was having with the publisher. He would pick people and they would disapprove after the fact.

Ultimately what happened is I began a friendship with the two of them, and they both left the company. [laughs] It wasn't specifically because of me, but I was part of it. And then ultimately, Kurt and I got to be buddies over the phone — because of course he lives on the west coast and I live over here on the east coast — and we worked out some other ideas and we ended up working together.

7. What is your dream project?

Well, that's of course one of those most asked questions, I think if I had a dream project it would be — if it was a project that was owned by some other company, like DC or Marvel or somebody — it would probably be the Creeper for DC, but if it was ultimately a dream project it would be something of my own. I don't know exactly what it is yet, there are various ideas that I have, it would probably have to be something that I either created or co-created. But I don't think I have a character or a concept...it might have something to do with the supernatural or something like that.

8. So you enjoy supernatural type comics?

Yeah, I get a kick out of the stuff that Kurt and I have played around with, especially Jonny Demon. It had that cross between martial arts and supernatural. We just love that stuff. And when I self-published my own book back in the 80's, Eagle, I also did — it was essentially the same kind of subject, the supernatural and martial arts. I would be very surprised if I didn't end up doing a book like that if it was my own.

9. What creators outside of comics would you say have influenced you?

Um...I don't know, maybe some illustrators, but I don't think anybody specific. Probably some filmmakers, you know, the old black and white films. I'm mostly influenced by film I would say.

I guess I like the film noir thing, and I'm a fan of horror films. Especially the Hammer films, the English horror films, I think there's probably a mood...or an atmospheric kind of thing that comes across in some of my stuff from that. And maybe even the storytelling, I suspect that whatever story talent I might have probably came from watching a lot of movies and television, as opposed to reading a lot of comic books. There's a certain amount of cinematic feeling to some of the stuff...that, and when I came into the books, that was the thing I did best in a sense, as opposed to the drawing. The drawing I kind of had to learn on the job, get better at, the storytelling came right away. So my guess would be that that came from film more than anything.

10. Okay, here come some less serious questions. What is your favorite food to munch on during those long hours at the drafting table?

[Laughs] I try to avoid a favorite food, if only for the reason you don't lose a lot of weight sitting at a drawing table. But in the last few years I guess the most — probably something like M&M's or something like M&M's — Hershey's kisses, if they're sitting around. But I try not to eat while I'm working for two good reasons, one I gain the weight, and secondly it makes for messy pages. I try to avoid that. I try to keep nothing liquid near my work anymore. [Laughs] I ruined too much stuff at the beginning of my career.

11. Outside of comics your proudest achievement is?

My family. I'd say definitely my family. I humbly don't even feel it's an achievement as much as a lucky accident that I ended up with my wife and my daughter.

12. If you were placed in charge of the National Endowment for the Arts, what would you blow the budget on?

13. No, no, that's fine, and here's the last one: are you the sort of person you'd imagined you would be as a child?

I think looking back on it, a little bit. I think in relation to what I said earlier, I wasn't really positive I was going to be a comic book artist when I grew up, so, in a sense, I surprised myself. But yeah, I think basically. I consider myself a comparatively decent fellow, and I can say I'm fortunate enough to end up with a good family. I've got a job I enjoy and I get paid for it, so that's kind of a dream come true, I guess you could say so.
Posted by Neil D Vokes at 7:16 PM No comments:

Well-So much for doing this every day!

I told myself i was gonna try to write something down in this blog every day...but the thing is i really don't wish to just write down ANY OLD THING!

I'm not so much worried readers will be bored or disinterested-that's gonna happen in spite of me-lol-so on those days i can't think of something more important I'll just post more art or old interviews and articles related to my fascinating life & career...

oh...wait a minute...i forgot -that's ME that thinks it's fascinating... 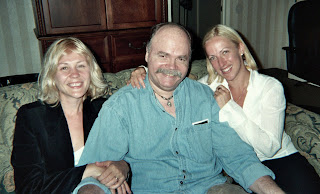