1st a Vampirella-with the image of the Warren mags' version of Count Dracula in the bg... 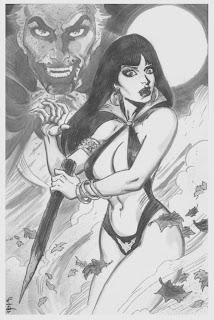 This was for a fan who enjoyed my stint on FRIGHT NIGHT, the comic series.

I was a huge fan of the film-still am- and it was my pleasure to return to the characters i drew in the comic (which started out with a bang and ended with a whimper-long story) well, actually i never got to do the central vamp from the film, Jerry Dandrige or hero Charley Brewster's girlfriend Amy, save for a panel or two-this was to be primarily a new storyline starring Charley and horror host/vampire killer, Peter Vincent-tho the infamous Evil Ed was still flapping his leathery wings about in several issues. 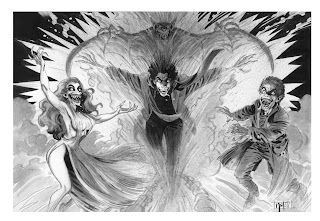 This commission started as a single piece with Peter Parker/Spider-Man changing into his web slingin' self in a Daily Bugle storeroom.

Then the fan who ordered it decided they wanted to expand it into a kind of story so it became 3 pieces.

The 1st is of the Bugle's editor, J. Jonah Jameson,screaming for his secretary, Betty Brant-she's missing and Peter sees a note on her desk giving him her whereabouts: 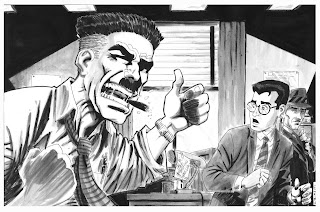 Then Petey heads to the always empty storeroom (Clark Kent and Peter visited those storerooms a lot in the old days-i guess because no one ever used them ;o) where we get an iconic hero changing outfits shot-a classic pose: 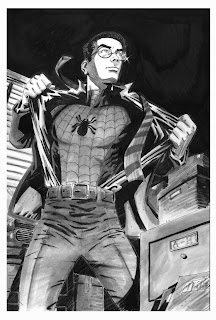 Lastly we have our friendly neighborhood Spider-Man crashing into the waxworks lab of the evil Parafino who is about to add Betty to his collection. 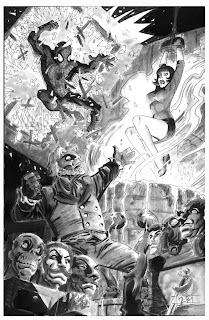 For those of you Spidey fans who don't recognize Parafino that's because he was a villain from the '60s cartoon show-what's more he looks nothing like my version-he was a rather drab looking baddie who made wax figures or something-so we decided to change him into a more dramatic horror filmish villain-i used the idea of a HOUSE OF WAX / PHANTOM type of character with a disfigured face who wears a mask-with a touch of theatricality in his outfit and the extra masks.
Posted by Neil D Vokes at 7:27 PM 3 comments: