Some of you may recall this piece i did awhile ago-it was an exercise to get comfy with doing the wash style i love so much- the reason i picked a drawing by Gene Colan (actually a couple pencil scans i found online that I inked over) was that his older Warren magazine stories (among others like Ditko,Frazetta,Craig and Adams) were some of the inspirations that led to me doing this kind of work myself.

I inked it in a brush style-tho brush is not my natural inclination-i need much more practice-because his pencils were so alive that almost ANY inkline would kill it's power. 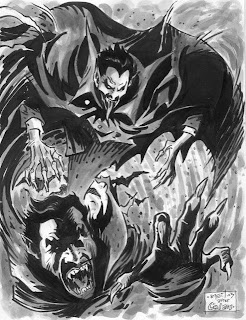 What led to this particular post is that recently i was asked-among many others- to contribute something to a charity of sorts to help out the Colan family with their many health bills- i felt it would be the least i could do so i took part of the 1st drawing and redrew/inked it as a separate piece for the donation: 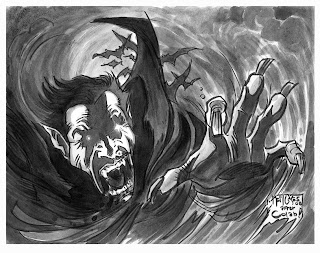 There are many artists who influenced me when growing up and it's only been the last few years where i began to realize how very much these gents meant to me-as a fan and as an artist...;o)
Posted by Neil D Vokes at 12:31 PM 3 comments: