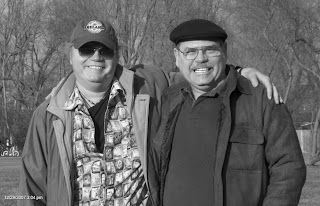 Powerful story Neil. A nice reminder of what this life is about when we're focused on the important stuff. Thanks for sharing.

you're very welcome,pal- it's been on my mind a lot lately and thought this was a good place to share it...;o)

Amazingly, he looks so much like you even after all those years. Glad you were able to meet him again.