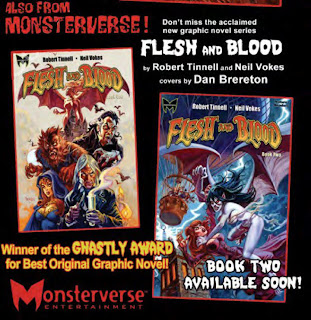 The initial popularity and attention garnered by Flesh and Blood, Book One and its subsequent success constituted one of the “feel-good” stories of 2011 publishing. The advance solicitation through independent comic stores for Flesh and Blood and its promise of an original graphic novel that paid tribute to the classic Hammer horror films was more than enough to grab the attention of fear fans.

Flesh and Blood started the new year out by winning Best Original Horror Graphic Novel of 2011 during the Third Annual Awards at ComicMonsters.com. Now in its second printing, Flesh and Blood will also become available in bookstores nationwide via Bookazine, a large book wholesaler to book retailers and libraries. Flesh and Blood, Book Two is expected to be released in May 2012, initially through the same independent comic store outlets that helped spread the word. In the introduction to Book One, Tim Lucas (editor of Video Watchdog) makes repeated reference to the Hammer film legacy. Lucas claims that Flesh and Blood is “nothing less than the epic Hammer horror film that generations of fans have yearned to see” and he calls it “the wish fulfillment of Hammer’s fan base.” It’s a great prelude to the graphic novel itself; but it left this reviewer a little apprehensive—wondering how Flesh and Blood could possibly measure up to those expectations.

Flesh and Blood, Book One does not disappoint. Page after page, panel after panel, the script and art deliver on the promises and praise of the introduction. And it’s only just beginning. After an exhausting and chilling start, there are three more volumes to follow. This is an epic saga, and readers may wonder in delight at what other terrifying treasures are yet to be uncovered. There is a film-like pacing throughout which only enhances the memories of those classic Hammer movies of the 1960s and 1970s. Reading Flesh and Blood is similar to holding the storyboards in your hand for a new Hammer filmic fear fest. Viewing the gorgeous art of Neil Vokes is almost like looking at animation cels. However, they are not simplistic in appearance, and the work is more detailed. These are not cartoon animation cels—more like adult animation cels where the images are more horrifying, bloody, and also erotic. Both Hammer Studio’s bloody tendencies as well as its suggestively sexual open-bodice female characters are represented and recreated here.

Flesh and Blood‘s writer Robert Tinnell humbly appreciates the growing fan reaction as sales continue to climb higher. “I’m a fan myself,” he explains. “I love horror in all its forms. When I began this ‘obsession’ with Flesh and Blood I hoped to craft a horror tale for the ages with literature’s greatest iconic characters like they had never been seen before but also very grounded in the Gothic traditions, atmosphere and exotic places these characters and stories are known for. I wanted an epic sweep to how its story builds across decades and centuries but always tightly centered around the human side to every dark fall from grace or heroic triumph of each of its ensemble of characters. It is quite a challenge to get a proper balance to it all. Fortunately, to push and pull me at times I also have the perfect collaborator in the superb illustrator, Neil Vokes.”

Neil Vokes smiles devilishly when he hears this. “Sometimes it is more like we really are monsters tearing at each other’s throats to get to the end of a scene.” He laughs and explains further: “Bob and I have been working together for several years now on many books (The Black Forest, The Wicked West). We don’t have to be nice to each other all the time because in the end we want the same thing—which is the very best effort towards making a moment pop with the right amount of big grand action or quiet nuanced subtlety. Somehow, we’ve grown to know each other so well that we can ride hell or high water through the wild parts of the creative process and end up with something the fans enjoy. I am astonished at how completely that Flesh and Blood has been embraced by the fans and greatly appreciate their kind acknowledgments in the press and the passion they show for it at signings. It is what keeps me drawing at my desk day in and out, trying to do my best. I know the audience is out there, waiting for the next book . . . and I don’t want to disappoint them.”

Robert Tinnel’s script pays homage to the genre and utilizes characters and situations to the maximum in what Lucas referred to in his introduction as the “epic juncture of Hammer’s great horror franchises in one dramatic, compelling . . . ‘monster rally.’” Classic characters as well as names of places will stir the memories. If you are a fan of Hammer Studios, you’ll also recall the names of characters matching those of actors, directors, and producers in Hammer history. The artwork is incredible and the colors by Matt Webb are vivid. There is much use of red and orange/blue and gray to outstanding effect—warmth and cold, fire and ice, light and dark, passion and frigidity. Some of the images seem as if viewed through eyes glazed over by blood. As drawn by Vokes, Dr. Frankenstein resembles actor Peter Cushing. Dracula looks like actor Christopher Lee. Carmilla reminds of actress Ingrid Pitt. And Horst resembles the actor (Horst Janson) who portrayed Kronos in the classic Captain Kronos, Vampire Hunter.

There is a great but short reference article in the back of the book with further information on some of the characters. This is followed by a second story, to be serialized in future volumes. “Operation Satan” is also very short, just three pages to set the stage for a story that is described as a homage to another classic film series—The Quatermass Trilogy. It’s also written by Robert Tinnell with black-and-white art by Bob Hall, tones by Kerry Gammill, and lettering by Rick Lebo.
Plans are for continuing volumes to be released quarterly. Flesh and Blood, Book One begins in the sinister shadows and candlelight glow of Transylvania with Dracula and Baron Frankenstein in the 1880s. Plans are to conclude the epic in Book Four in the garish neon streets and darkened alleys of swinging London in the 1970s with many tragic surprises and shocking twists along the way. This is grand genre storytelling of supernatural terror with the forces of light and darkness battling across time and in the most exotic regions of this earth and perhaps . . . other worlds.