It has been a complete and utter joy to do so as I adore the original films-also,since then I've made several friends thru the fanzine who are very good artists in their own right- Adrian Salmon,Bruce Timm,Dan Gallagher Jr.,Frank Dietz,Jeff Preston,Mark Maddox,Shane Oakley and others.

Many of these gents are what I consider "complete artists"- in other words they can pretty much do anything-including beautiful color work-I however am primarily a B & W artist...which leads us to today's post.

For the upcoming 23rd ish of LSOH,Dick asked Ade and I to contribute inside back and front covers in color-no great challenge to Ade as he is an amazing colorist-but i have only done a handful of projects in color in my entire career (one of which is the background of my blog's title above) and feel much more at home with my blacks,whites and greys.

The subject of my piece is from the film THE MUMMY'S SHROUD-directed by John Gilling (a featured writer/director in the new ish.) I originally chose an action scene,showing the mummy throttling members of the cast... 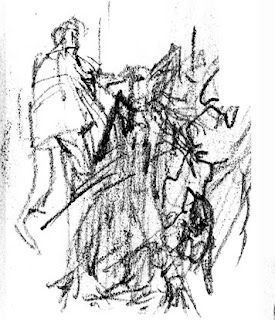 I then thought it might be fun to show the scene where the heroine uses the shroud of the title to destroy the creature-causing it to crumble to dust... 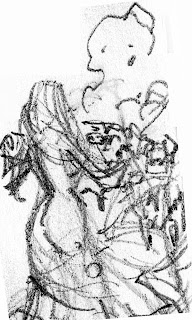 After careful consideration of the need to show the lady in a gratuitous shot from behind,accenting her ass-sets...ahem...I decided to concentrate on the mummy's decaying form instead...sorry lads...;o) 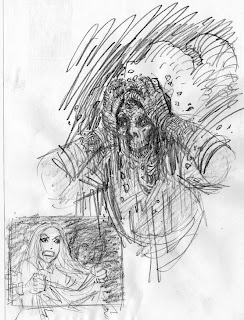 Tho I thought it might be fun to include a panel of her with the shroud (above) I realized the point of the piece was the mummy crumbling to dust.

I placed tracing paper over the pencils and did an inkline to have a solid base for whatever colors i might add-I also added some "splatter" FX via my trusty toothbrush (an old used one of course ;o) 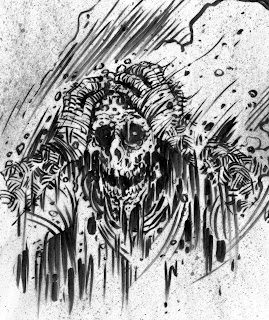 I then scanned the art and played around with some filters in Photoshop-i wanted an interesting effect-something that evoked decay-after a few hours of experimenting this is what i ended up with... 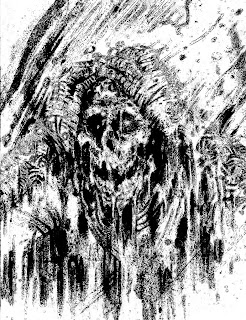 Then I spent several days,on and off,frustratingly trying different color styles-i wanted some of that "Hammer color" that they did so well-but my coloring abilities were found wanting.

I tried color pencils,water colors and some wash (done on a lightbox over the inkline)... 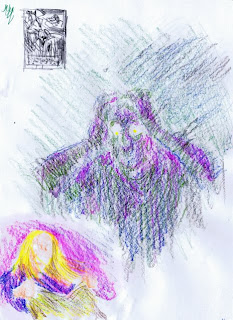 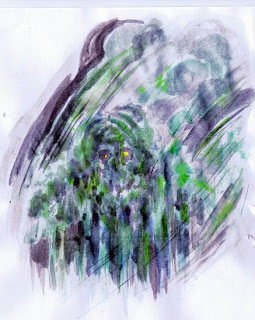 It occured to me that i could scan these various color trials and combine them in Photoshop,then overlay them with the inkline-the reason that I didn't start with that plan is that I prefer to use the computer as little as possible in my work-I'm old fashioned that way-but this problem was too frustrating and I thought why not?

So I combined the various color pieces with the filtered art (there were MANY different variations) until i settled on this... 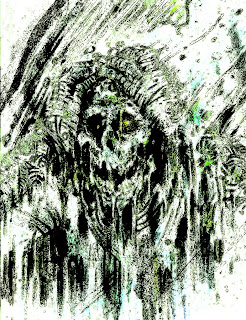 I printed this out and added more bits of color with water colors and pencils and some solid black in the BG... 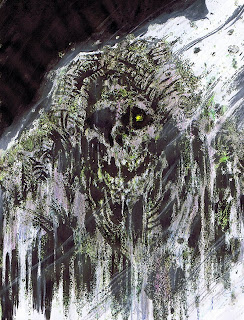 I scanned that and played around a little more with color hue saturation and contrast-what finally caught my eye was far from what I thought I was going to do at the start,but it seemed to work-I added a little title for the piece and then sent it off to Dick for approval... 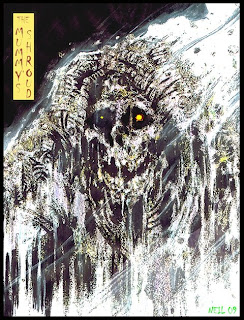 ...amazingly he loved it (what was truly funny is that Dick and his lovely wifey,Nancy,wanted to buy the original from me-the long winded explanation that there wasn't actually an original that looked like the final work was amusing to say the least-lol) and I was able to finally go back to my B & W work in peace!